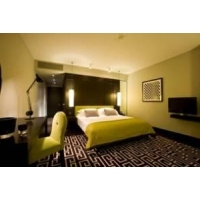 The vast majority of hotel guests who regularly use wireless broadband services while they are travelling would prefer free, capped access over paid-for alternatives, according to a new survey from The Mystery Dining Company.

At least eight in ten consumers confirmed that Wi-Fi is an important factor in choosing where to stay, with 76 per cent of them preferring a less reliable, slower service with a capped limit over a higher quality connection with a charge based on data consumption or time.

Some 99 per cent of respondents believe they should automatically be given free wireless internet access if they have paid £100 or more for a hotel room.

However, guests would not necessarily expect to have Wi-Fi available in their room, with 78 per cent stating they would be prepared to head to a dedicated free Wi-Fi zone if it meant accessing a faster and more reliable service.

Sending emails and downloading were named as the primary reasons for needing wireless broadband in hotels with 48 per cent citing these factors, while 39 per cent said the bulk of their usage comprised using social media websites and browsing the internet.

Just eight per cent used the connection for financial transactions and only one per cent regularly stream TV programmes and films.

Director of The Mystery Dining Company Steven Pike said: "There were two key issues shared by respondents, the first being steep charges associated with pay-to-access Wi-Fi, as well as the lack of detailed instructional literature or guidance supplied by the reception desk or in rooms about how to get onto the local Wi-Fi network.

"The other big issue seems to be hotels not equipping the guest with adequate information about Wi-Fi provision."

This study comes just days after Spectrum Interactive secured a contract to roll out Wi-Fi to all 600 Premier Inn hotels across the country.