Tuesday, March 30th 2010
Tweet
Share
A new mobile broaband service could be set to benefit the residents of Norwich. 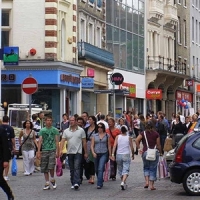 Residents of Norwich could soon be set to benefit from a new, fast mobile broadband service.

Engineering firm Babcock International is constructing a new network across the city that is due to go live this summer, reports the Eastern Daily Press.

And the good news for people in out-lying areas of the city is that the company is planning to extend the service to rural areas.

Babcock's is setting out proposals for a city centre wireless zone on an open access network, which means that there would be no monopoly on which internet service providers would be able to use it.

"We are looking at bringing broadband to areas with low speeds or no broadband and unlikely to get any in the near term," said Richard Lewis, project director at Babcock's Next Generation Networks division.

Last week, the Norfolk Eastern Daily Press reported that a campaigner in Norfolk has called for a boost to broadband services in the region.

Nicola Currie, eastern region director of the Country Land and Business Association said many rural homes and businesses are in need of improvements to their broadband services.