Friday, August 27th 2010
Tweet
Share
A charity bike ride from Land's End to John O'Groats will be used for the beta trial of TalkTalk's new mobile broadband dongles, which launch later this year. 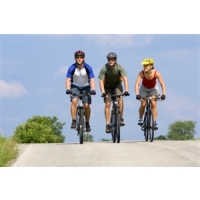 TalkTalk has revealed it will trial its soon-to-be-released mobile broadband dongles on a charity bike ride from Land's End to John O'Groats.

The home phone and broadband provider is sponsoring the initiative, which is being undertaken by senior physiotherapist Sarah Beckingsale and consultant surgeon Steve Mitchell in order to raise money and awareness for Great Western Air Ambulance.

During the 910-mile trip, which the duo hope to complete in just nine days, they will also be beta testing TalkTalk's mobile broadband dongles, which are due to be launched later this year.

Writing on the TalkTalk blog, communications director Mark Schmid explained: "[They] will be able to keep their fans abreast of their progress, whether they're in Bristol or the Borders."

Although TalkTalk has yet to reveal the pricing for its mobile broadband proposition, it may face tough competition from current providers such as Orange, O2 and T-Mobile.

ABI Research claimed earlier this month that the UK offers some of the cheapest mobile broadband deals in the world.

Full-fibre network nearing launch in York
15th May 2015
A new FTTP broadband network is being created in York.
SMEs seeking broadband benefits
14th January 2015
UK SMEs hope to gain considerable benefits from ongoing broadband investment.
Coverage for UK 'not spots' to be improved
22nd December 2014
Many mobile coverage 'not spots' are to be tackled following a new deal.
EE to extend 4G coverage by 2017
13th February 2015
EE has announced plans to significantly bolster its 4G network coverage over the coming years.
Major ISPs force customers to decide on porn filters
2nd January 2015
Existing customers must now choose whether or not to activate adult content blocks.
Rural broadband campaign launched by BDUK
17th December 2014
BDUK has announced the launch of a new campaign to promote greater uptake of broadband in rural areas of the country.